Writing a blog seems more time consuming than ever. I’ve been meaning to get things up to date and failing. This blog is a little out of sequence to the previous ones I’ve written but for my own sake, it needed to get it done.

Some time ago I was lucky enough to be the first member of the public to walk through a Crossrail tunnel. Not the whole thing but the section that passes under the Thames from Woolwich. The station at Woolwich was just a hole in the ground and I had to climb down a makeshift staircase that led down to the entrance of the tunnel. 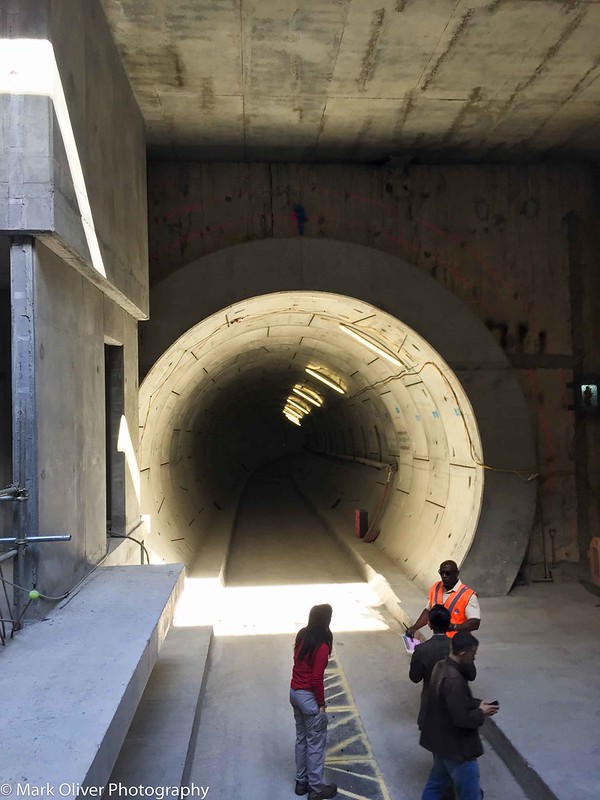 The track at this time had yet to be installed, so the tunnel was just a pathway under the river that was reminiscent of the Woolwich foot tunnel that was opened on 26th October 1912.

This simple act of being the first to walk through the tunnel wasn’t demanding but it did have the fascination that this rare opportunity would forever be part of my history and maybe that of London one day. The tunnel seemed fairly narrow considering that modern trains were going to be rushing through it in 2017. The temperature was much cooler than that of the surface and with various dips and turns the end couldn’t be seen until the last 200 meters. 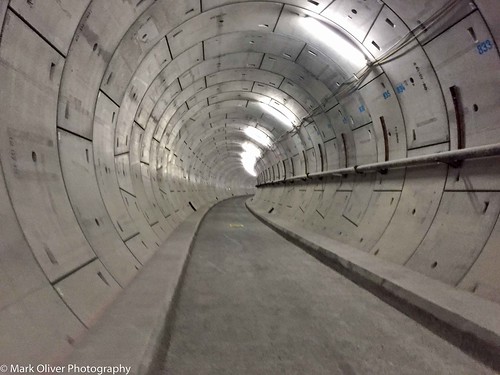 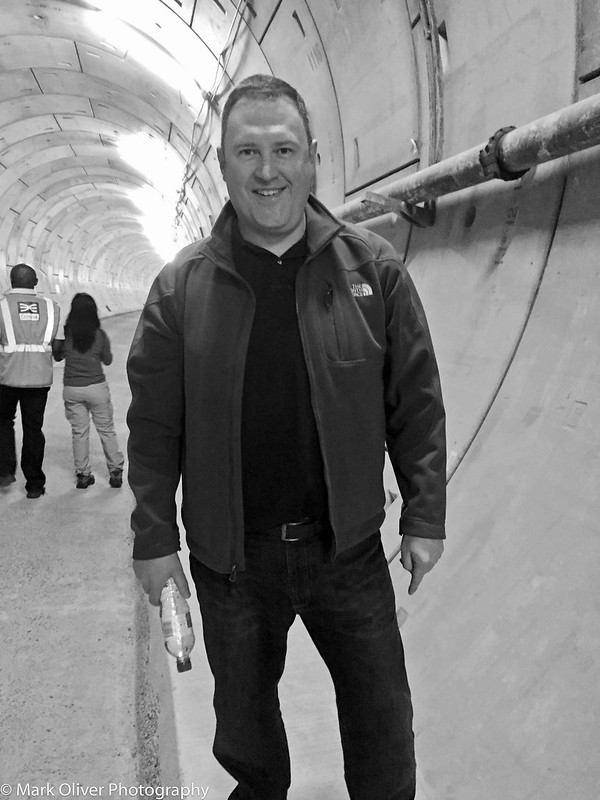 The representatives from Crossrail were very informative about the challenges and details of the tunnels construction and were prepared to answer virtually any question put to them. The walk through didn’t take more than an hour and I loved it.

Well over a year ago I bought tickets to see Hamlet at the Barbican in London. As you may know from previous blogs I’m a fan of Sherlock and its star Benedict Cumberbatch. Ordering the tickets back in 2014 took skill and many computers to succeed. I understand that they sold out in a matter of minutes and I was lucky to get a pair. Roll on 2015, London and the media seemed gripped by Hamlet fever. The newspapers reviews after the first night were raving about the performance and screaming Cumber-Bitches travelling from all over the world just for a chance to see BC at the stage door with tickets to the play being a dream of course. The theatre was a reasonable size and I had stall tickets which gave me a really good view of the stage. However, things didn’t run smoothly. As the ushers left with their please don’t take pictures signs, the lights dropped and the curtain lifted. BC appeared alone on stage, looking through boxes with a single spotlight on him, ready to deliver the famous, To be or not to be soliloquy. Then the curtain closed again and the house lights came up. Well, I thought. Shakespeare didn’t write much did he?

A man appeared to explain about a technical hitch and that things would start again soon.

After 15 minutes or so it did and the set design and entire cast were magnificent. The stage and set design was vast including a trap door under a rug that sadly caught itself in the rug while being raised. As BC was once again, alone on stage and acting his socks off, the stage manager with her headset on walks up to BC and whispers in his ear that the play has to stop for a second time for health and safety reasons. BC storms off to the rear of the stage and through a large door. At the top of his voice he screams, FUCK!!! I have to say that did make my chuckle. This pause in the performance was a little longer but did result in a treat with BC coming out into the audience and apologising. He explained that it was only the 4th night and some wrinkles need to be ironed out. Certainly different.

I’m told that you can’t really judge a play till press night despite the press already giving it rave reviews. The stoppages were however a memorable addition to a memorable performance of Hamlet. I would normally say, its well worth a watch but unless you have £1500 for a ticket I’d wait for the DVD.

Today is meant to be the hottest day of the year. Having booked some time off work over 5 months ago I wasn’t to know that fact and it’s just a fortunate accident that I don’t have to work and I get to sleep in late and keep cool with a nice cold beer and a Dyson fan. I had planned to sit in the sun for a bit but despite the high temperature of 36c it isn’t very sunny. So, I find myself getting Moliblog updated.

Some time ago I attended a Sherlock convention at London’s Excel. The organisers really failed in my opinion to deliver a good and memorable experience. The desire for such a gathering was clearly there with rows and rows and rows of fans having travelled from all over the world to share their love for all things Sherlock. We had to wait in very long lines in one of the big halls and depending on how much money you have and the pass you bought you get to go in earlier than the other poorer people. The ticket prices were extortionate and misleading. I bought a Saturday ticket for £29. I thought this was expensive for just a one day event but I really wanted to go. Once I bought them and got my confirmation email I then had to pay another £2.50 to validate the ticket otherwise they wouldn’t be valid for some reason. I’ve never heard something so ridiculous but I paid it because I wouldn’t want my tickets that I bought to attend the event not to be valid. Why they didn’t just charge me the extra amount at the time I really have no idea. I wonder what would have happened if I didn’t pay? Sorry, you can’t come in with your £29 ticket as its not valid??? 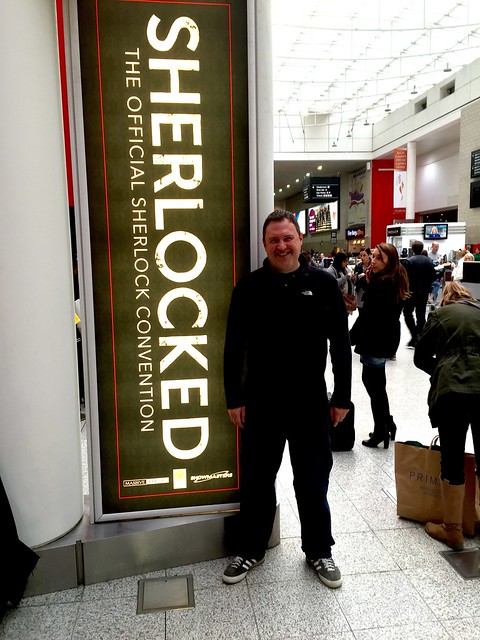 The time between buying these tickets passed and the guests were announced which included Sherlock himself, Benedict Cumberbatch. He was giving a talk, having pictures taken with fans and signing autographs. However, all this was only open to the quickest and richest fan with tickets up to £3000. I did pay through gritted teeth to attend the talk but at £35 it was more expensive than the ticket I bought which I assumed was to attend talks anyway. Then to rub salt into the wound I had to validate that ticket too. For Fucks Sake!!! I’ve gone from feeling excited about attending the first Sherlock convention to feeling ripped off. 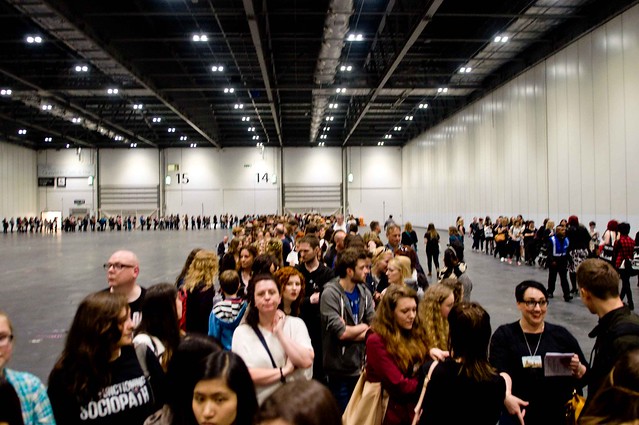 The long, long line of people were then led into the main hall and the ticket class system just broke down with a mad rush to get inside and see all the surprises on offer. Sadly I was met with more lines of people waiting to visit a room full of shops with frankly not very much on offer that you couldn’t get online already and cheaper. Did my £29 really go on this? There was the special effects stall that was fun. Sugar glass and fake rubber arms to play with and the special effects artists were very informative. However, apart from waiting in line to have my picture taken outside the Sherlock front door and a London bus which given I live in London, I’ve already done. I want my money back!!! 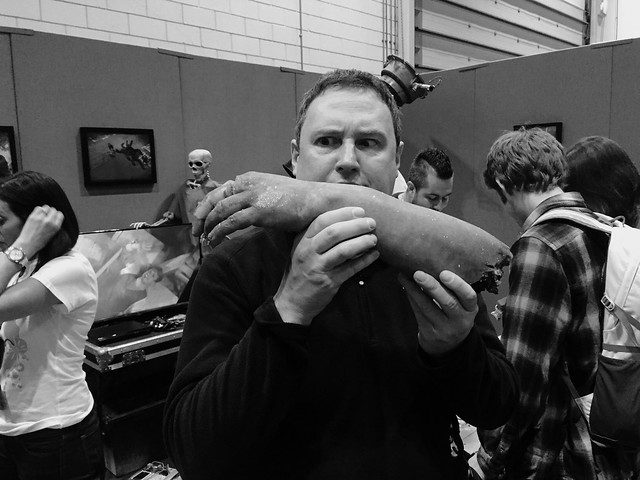 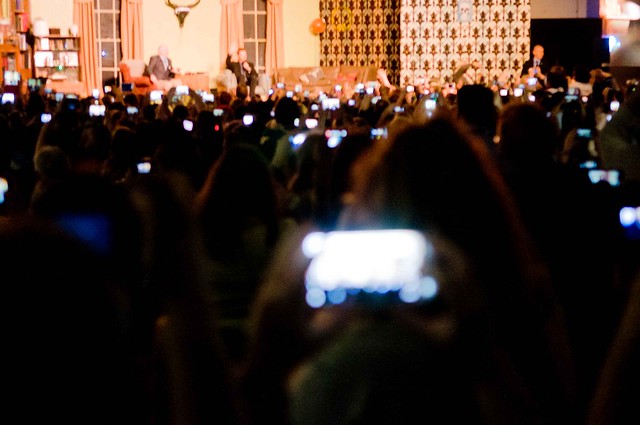 The talk that I paid a fortune for was far from an intimate affair. Thousands of people were crammed into a big hall and once again., depending how much money you have, you got closer to the man himself. I was several miles away from the stage but I had to admit that apart from the tiny arse seat, the hot conditions and the elbow knocking of the woman next to me, Cumberbatch was interesting, informative and funny. I really enjoyed listening to his views on acting and how he approached the role of Sherlock. However, that should have been for the price of admission and not for the grand sum of £69. The stewards didn’t know anything and just told me to ask someone else when I had a question about where to go or what I should do next. There were other talks from production crews but these were so disorganised and if you wanted to attend one it often clashed with another. The guests looked bemused in most cases and failed to give any real insight into their thought process for production design or costume. It felt like they were just pushed on stage and told, get out there. Very poor!!! 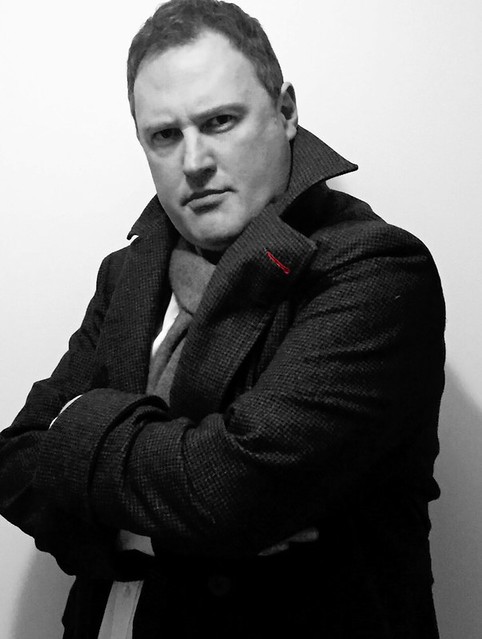 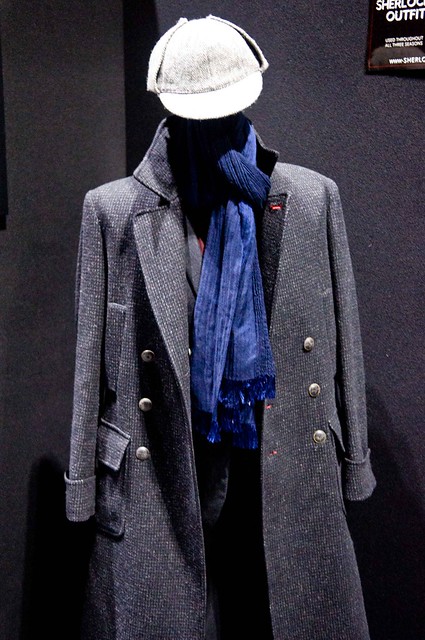 Somebody is clearly laughing all the way to the bank and I’m sure it will be back for a second helping of this cash cow in the near future. I, however, won’t be.

Don’t be poor and like Sherlock, you’ll get left behind!

January is one of those months that really just lead to the rest of the year for me. Nothing interesting ever happens to me in the month of January and from the typically dismal New Years Day to the very last day of the month it has always been dull. This year has been a little different. I still hate January but I’ve had a couple of distractions, which have helped me pass the time towards February.

At the start of the month of gloom I’ve been watching TV and like half the planet I love the TV series Sherlock. If you are one of those people, that for some reason have failed to watch the show, it’s a modern take on Sherlock Holmes by Sir Arthur Conan Doyle.

If you don’t know what that is then you really need help!!!

At the start of January I was lucky to meet some of the cast of Sherlock. But sadly Sherlock himself Benedict Cumberbatch and Watson played by Martin Freeman was unable to attend the reception for the shows Season 3 finale but the rest of the cast however were in attendance which was great.

Meeting the cast was a real thrill for me as a fan but season 3 of Sherlock was less than satisfying for me with much less detective work and mystery that for me had made the show so interesting to watch. It changed and become more self-indulgent and comical. Also, the two years that had passed since season 2 finished had clearly allowed Sherlock to find a zany personality with a more character driven narrative that was very different to the style that I had preferred.

The new super baddie of Charles Augustus Magnussen played by Danish actor Lars Mikkelsen (The Killing) was fairly cold and scary but like most of Steven Moffat’s characters, they fail to get used properly and finish before they get started. He had such potential and could have been a fantastic replacement to the amazing Moriarty played by Andrew Scott. However, the tease that the character of Moriarty might be coming back in an exciting cliffhanger for the confirmed season 4 promised at the end of this year.

Sherlock, Season 3 was good but not the show I was expecting and had been waiting a long time for.

Next, my short holiday…