Sometimes I envy people who love sports like football and rugby as they can easily travel to watch a game anywhere in the country or at their local stadium. Being a fan of Formula 1 is an expensive, global affair and unless you want to watch it solely on TV you need in most cases to get on a plane and spend some money. This has been the main reason I’ve never bothered to watch a race, even in the UK. The cost of tickets, t-shirts and hats to support your favourite team and driver makes the average football shirt look like the bargain basket at Primark. People have always told me I should go but for me I love it so much that I didn’t want to sour the experience by camping in a nearby field and watching the race from a video screen with a ham sandwich. I wanted to do it up close, in style and why not.

A friend of mind was heading to the 2015 American Gran Prix in Austin, Texas and knowing this I wanted him to bring me back something uniquely connected to what is one of my top three tracks on the F1 calendar. I was willing to give him a small pile of money in exchange for a t-shirt with various logos and team names. To my shock he said that the trip was off due to a family dispute and that he won’t be going. I was sad for him as he is a massive F1 fan and I couldn’t imagine looking forward to such an event and then at the last minute missing out and of course losing all the flight, hotel and track money. He offered me his tickets as a souvenir and consolation for not getting my t-shirt. He then passed a comment that would change everything. “If only you could get the time off work and go?” Now at this point I laughed if off and after some very short consideration, said, “fuck it, lets do it”. I’m taking some time off for my birthday anyway. So, I found myself booking a flight to Texas but this was Monday and the race weekend is in 4 days. I couldn’t get a direct flight to Austin, so I had to fly into Houston and then get a connection across. United Airlines was the cheapest option in cattle class but this just wasn’t the case as they were using a 3 week old Dreamliner with massive windows that can be electrically dimmed to create a cool blue purple colour that changes the interior from day to night and creates a very relaxing travelling experience which I needed as my total journey time was over 15 hours. The time passed quickly as the plane was full of people heading to F1 and chatting to strangers and sharing insights into each other’s lives can be very distracting. 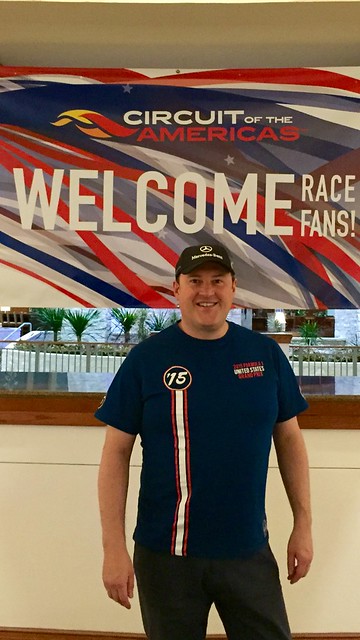 My enthusiastic impulse decision to go to America meant that I didn’t look at the weather report. I really didn’t look. It’s Texas for goodness sake. Cowboy’s, dust and sun. Not hurricane Patricia the worst category 5 hurricane to hit land in the western hemisphere right? The Friday I landed it was humid and a little damp but nothing to worry about. Waking up and going to have breakfast in my hotel with loads of fans was fascinating but the faces told a different story. The weather wasn’t great. It was very not great. It was terrible and things were going to be delayed until 12pm. The rain from the hotel window looked fairly heavy but I decided to take a taxi over to the track that was only 20 minutes from the hotel. The Circuit of the Americas is a gorgeous track even in dark clouds it look great. The driver took me as far as he could and I got out of the car. I believe that 20 or 25 seconds went by before the rain hit my skin. Every part of my body was soaked to the skin and given that I had several waterproof layers on, it was a bit of a shock. I remember putting it something like this. “Fuck Me!!!” Clearly my clothing wasn’t hurricane proof and I’m not sure what clothing would be. The sheer intensity of water and wind I’ve never seen in my life before. Rain was coming from above, below and to the side. It was difficult to breath and speak without spitting water out of your mouth and a question came to mind. Has anyone ever drowned in rain? As the temperature dropped the cold, wet and wind took its toll on everyone and we all ended up hiding on a big tent that served as a retail store/ refugee camp. 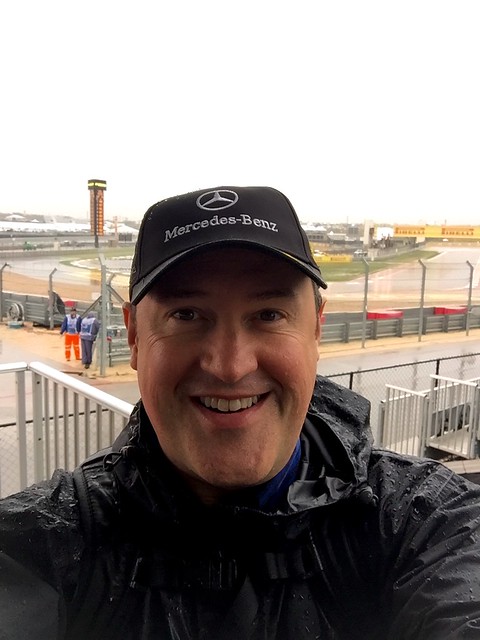 I should have been upset and disappointed but being in a big room with loads of F1 fans was a fantastic experience. Yes, I was cold and wet and hadn’t seen a racing car yet but I was speaking people in that tent from all over the world that had travelled all over the world for the love of this sport. I heard about other race experiences and that the weather isn’t always nice. Some people did point out that I was unlucky for my first race but I really didn’t mind at this point as I was having fun. The weather just got worse and worse and it didn’t show any signs of clearing. I was a little worried that the race itself would be cancelled on Sunday. The planned driver meet and greets for Saturday afternoon were also cancelled which was a little annoying, so I decided to call it a day in the end and head into down town Austin. 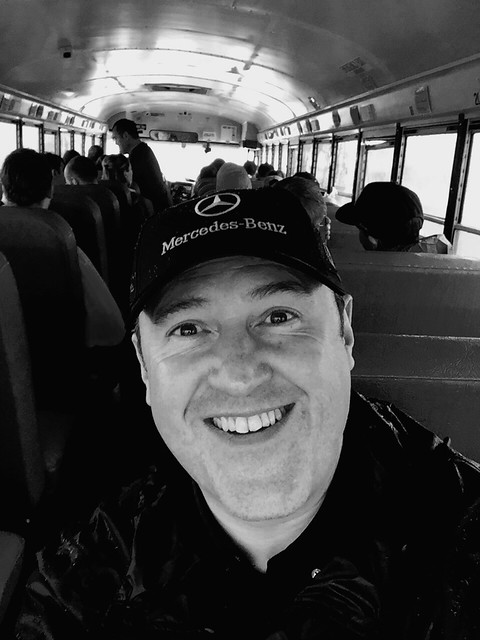 The only way to get back there was by getting on a big yellow school bus that I’ve seen in the movies. This was very cool but the windows wouldn’t close and the wind and rain just poured in. However, when you get to a certain point of wetness it really doesn’t matter any more. A nice touch inside the massive school bus that had child size seating but a roof so high I couldn’t touch it, was little cards with the names of the children who normally use the bus. I still can’t work out why the bus needed to be so big in size and still only allow such tiny legroom between the seats. Down town Austin was in full party mode and 6th street was where all the action was. I enjoyed some food, drink and soaked up the atmosphere but my body had also soaked up most of the hurricane and my arse was very cold and wet, I therefore decided to have an early night, get dry and prepare for qualification and race day which was now planned to happen all on Sunday. When I got to my hotel it was also in party mode and after I had recovered, dried off and my fingers no longer had wrinkles I joined in with the beers and chats with the others. Race Day 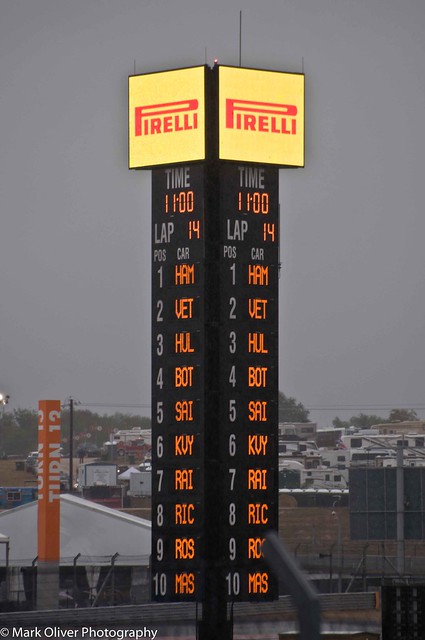 Race day. Today was going to be a very busy day. Qualification and race together is very rare. The weather was much better but sadly still raining and windy. This however was now balanced with energy around the track with fans buzzing with expectation. I was sitting at turn 5 that is one of the fastest parts of the track getting up to 200mph.  Getting wet was no longer a problem as I sat in my seat, which was mostly a puddle, and I just didn’t care. The first part of qualification started and hearing and seeing these cars in the metal made my skin tingle with excitement. The track made things a little bit twitchy for the cars and Carlos Sainz spun off into the wall right in front of me. I just turned my phone on to video a short clip and I managed to catch it.

The third and final part of qualification was cancelled as the weather got worse again and the pole positions were decided from this point. Once more the fans and I huddled into a nearby tent for shelter while people ate massive turkey legs like it was some medieval banquet and drank beer. I appeared to have arrived on the set of Game of Thrones. As we waited for the time and weather to pass, some Texans apologised to me about the weather and that this had been the first rain they had seen since May. The truth be know, it was actually the most rain ever seen in Texas since records began.

The reality is that I didn’t care about the rain but only that after all my efforts to get to here; I might not get a race after all. I looked into the sky and I could finally see a patch of blue. Blue, Blue, Blue sky!!! The weather cleared, the tracked dried enough and we had ourselves a race. 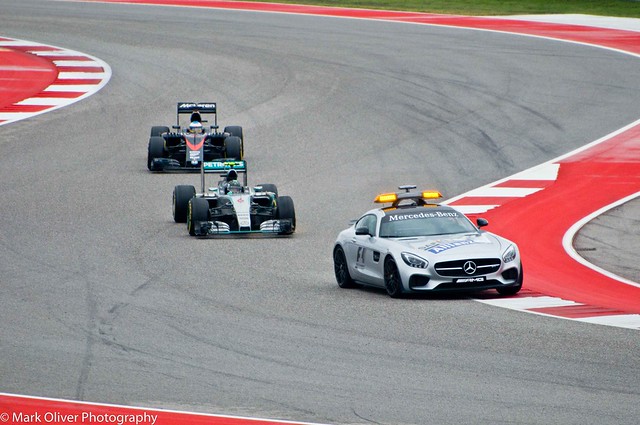 Now I had a chance to watch my first F1 race and it didn’t disappoint. I won’t go into every turn and spin but as races go, the race was exciting and the race leader kept changing throughout. As the conditions improved things got faster and it was nothing like watching on TV. The sound of the engines was great, except the McLaren engine, which sounded like a really sick lawnmower, poor Jenson Button. As the race was drawing to an end it was a mistake from Nico Rosberg that helped my man Lewis Hamilton to pass into first place and win the race, not to forget the world championship, which is something I was very proud to be there to witness. 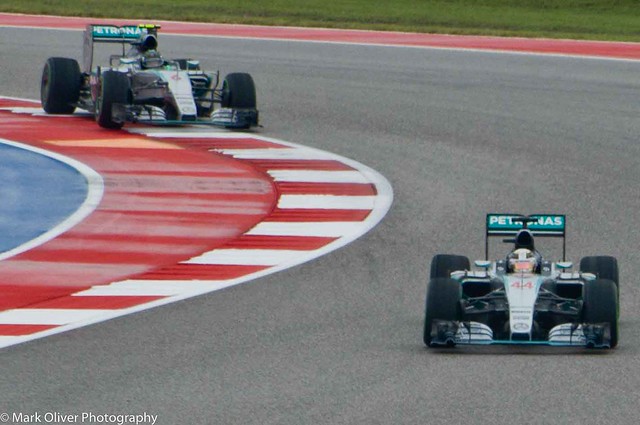 I had a little tear in my eye as the crowd of British fans that surrounded me sang the national anthem at full blast until we forgot the words, which was about 10 seconds after we started. Afterwards I was lucky enough to walk around the racetrack and take few pictures before heading off into down town Austin to celebrate the win, which I did to the best of my ability.

The next day I did a bit of sight seeing at the capital building and around the university before heading off for yet another Tex-Mex meal in which was now hot and glorious sunshine. Such a shame it couldn’t have been like that every day. 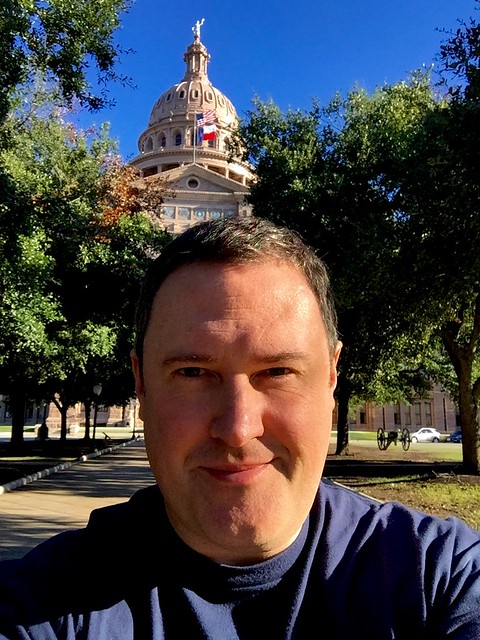 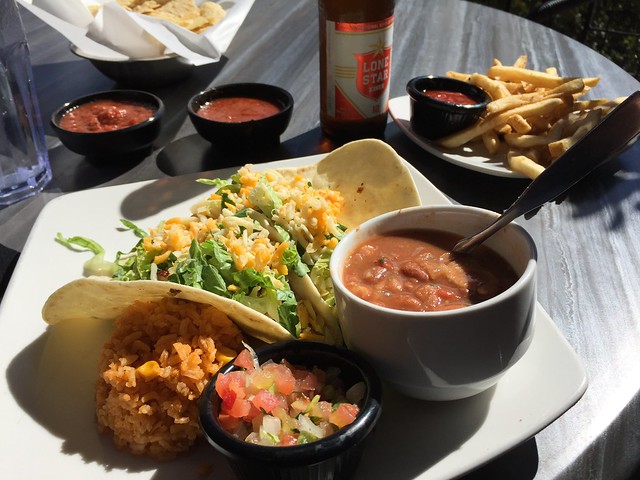 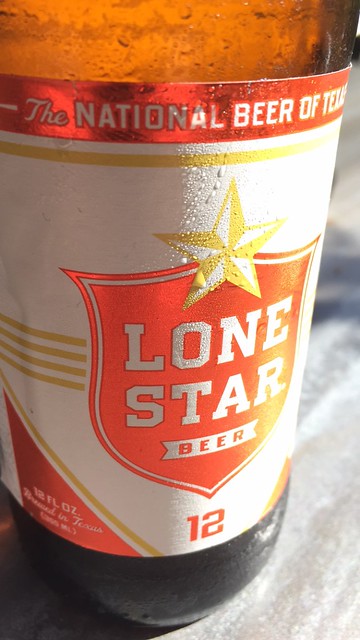 The most important thing is I got to see my first F1 race and I finally got that t-shirt. It just cost me more than I’d planned. However, I can’t wait to go back again.

Please leave me some feedback.

2 thoughts on “Moli goes to Texas…”