It’s almost impossible for anyone to have missed the marketing and media that has for over a year led to the premiere of Star War, The Force Awakens. Ever since George Lucas sold the rights of the franchise to the Disney Corporation for over $4bn we all knew they wanted to get their money back and selling t-shirts wasn’t quite going to cover it. Before I continue I just want to say that this is going to be a spoiler-ridden review and if you’ve not seen the film yet I would recommend that you stop reading this, as I’m sure I will spoil it for you.

Right, now I can continue.

I want to say that I’m a Star Wars fan. I’ve seen all the movies several times and the original three films probably more times than is healthy. I’ve been lucky enough to meet many of the cast including Carrie Fisher and have even had dinner with producer Gary Kurtz for the inside line on the original production. I say all this to firstly do some gratuitous name-dropping and by way proof that I really love Star Wars. I’m not keen on all the CGI for episodes 1,2 and 3 and think they were very weak in plot and character development and in particular, in comparison to the original 3 three films. The original films had their own creative problems too and I won’t spend time going into any detail about that now but I will comment on one element that of the narrative around the Death Star and the ultimate battle to destroy it with a single shot from our hero Luke Skywalker. This was amazing in 1977 and I remember cheering in the cinema when the whole thing exploded. Annoyingly in The Return of the Jedi they pretty much did that all over again with another big explosion and without the benefit of home video I’m sure we all cheered again. However, upon reflection, I’m sure they could have come up with a different story? However, we accepted this and moved on.

Now, nearly 40 years later and we are all marketed to within an inch of our lives to go and watch Star Wars 7 and guess what. Spoiler alert, they have a Death Star type planet they have to destroy. I mean, come on. Really??? You’ve had 40 years to come up with a new story and you basically copy Episode 4 that was then copied by Episode 6 and now Episode 7. If these films were produced and shown within a few years of each other the public would be screaming for their money back!!! The underling plot for each of these films is different but ultimately the premise is the same. Blow up the big killer ball to save the universe. Maybe we could have a cube or a triangle next time? Now, I honestly didn’t want to get sucked into all the media hype and I deliberately waited a couple of weeks for the dust to settle to give myself a less influenced opinion of the film and I strongly feel that most audience members that went to see the film on release date having booked them months in advance and any film critics that were wined and dined would have found the movie the best thing since sliced Bantha. 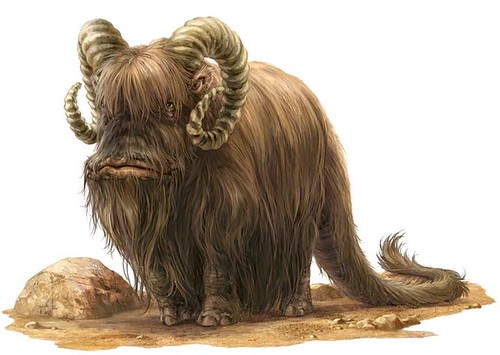 Certainly the early reviews like that of Bond movie Spectre were claiming to be as good as anything that came before but many of the US critics could see past the hype of Bond and I feel I’m seeing past the hype of Star Wars. Of course, everyone is entitled to his or her opinion and nothing I’m saying here is the definitive view. Don’t get me wrong, I did find some elements really special. The film was clearly produced with love and by people that understand what made the original films so good. I loved the reduced and less obvious CGI and the imagery of a Star Destroyer crashed into the sand looked amazing, along with the classic feel of the Millennium Falcon and the attention to detail throughout the production. This was all done with care and consideration but I was concerned that the production artwork didn’t move things forward enough and given the amount of time that has passed in the Star Wars universe the ships on both the Rebellion and 1st Order side hadn’t been updated. It was like having a car chase in the Sweeny 40 years ago and then having a 21st Century remake and still using a classic Granada and a Jaguar as a getaway car. It just wouldn’t happen. Why didn’t they update anything in the last 40 years? Did the Star Wars branch of PC World close down? The new droid, BB-8 is however an excellent upgrade to the ageing RD-D2 and C3PO that I know Star Wars fans love but which I feel have served their purpose and it was good that their appearance though essential was kept to a minimum and R2-D2 barely giving a beep throughout the film. 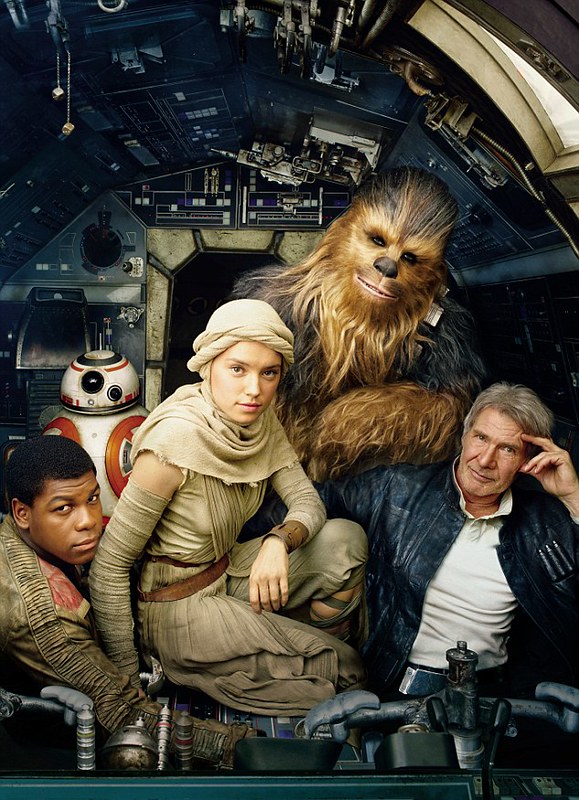 The two new hero characters of Rey (Daisy Ridley) and Finn (John Boyega) brought a breath of fresh air to the franchise but with sadly a little too much Disney comedy and sweetness for me. A majorly under used character of Poe Dameron (Oscar Isaac) was a great shame as the greatest pilot in the galaxy was hardly seen and as an actor, Oscar Isaac was wasted. 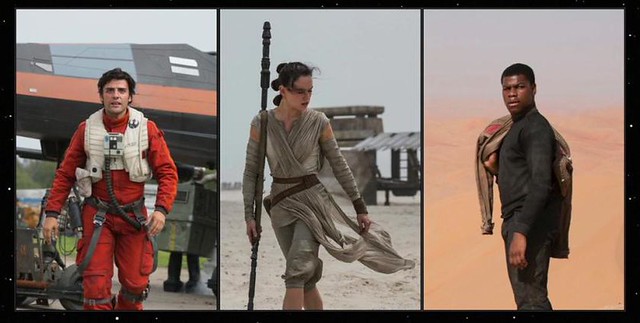 However, I understand this is something that will be corrected in Episode 8, Attack of the Triangular shaped object. The character I struggled with the most is Kylo Ren. (Adam Driver) Dressed in black with a mask and lamenting Darth Vader’s legacy, he just appeared like a Sith Lite or Diet Darth Vader and lacked any real menace and almost coming over as a bit inept. 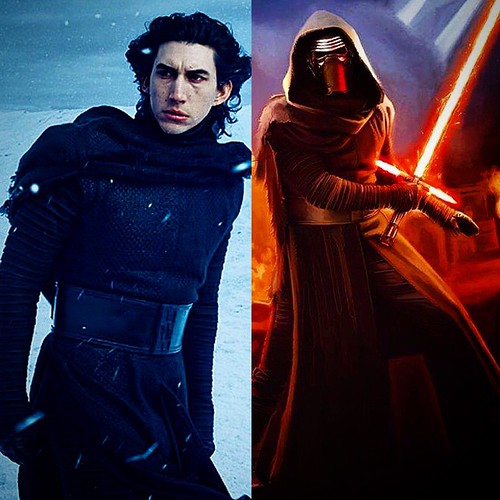 The biggest mistake was his removal of the mask to reveal what can only describe as a bit of a twat. He had the sort of face that you just want to slap while telling him he’s a naughty boy. If he did have any menace, it was now totally lost and the only way it could have been worse is if Franks Spencer had been revealed with an “Ohh, hello.” I understand that the books, comics and various other texts give all these characters back stories but if I pay my money to see a film it needs to stand on its own two feet without the need for me to have read around the subject first. Harrison Ford played his Han Solo character by the numbers and there weren’t really any surprises except that he was clearly there for the money and to get out as quickly as possible, which he did before the film ended. The biggest disappointment was Luke Skywalker played by Mark Hamill. He became the Star Wars version of Where’s Wally, and didn’t get revealed until the last 20 seconds of the film which I was stunned at given all the hype and the global premieres featuring Hamill along with all the cast. Apart from being older and having a beard I really couldn’t understand why he couldn’t be our hero again and have a more significant role in this new film.

I’m sad to say that this film didn’t live up to my expectations but it was fun, nostalgic and an entertaining film and I do actually want to watch it again but I need to give it some time. I went to see it in 3D at my local Everyman cinema in Canary Wharf, London with its comfy sofas and armchairs. I couldn’t have had a better viewing room and it’s Star Wars type tunnel leading to it. 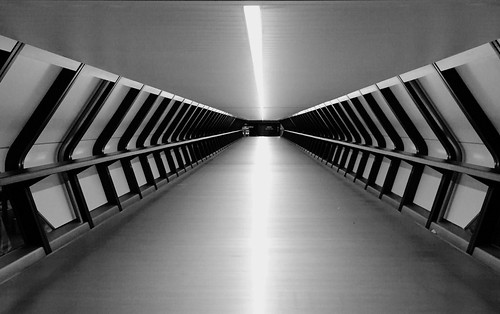 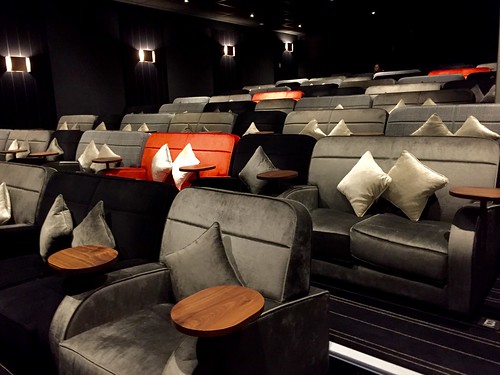 I’ll wait till it arrives on Blu-ray and watch it at home to see if it grows on me. I really hope the future films can move things forward and make better use of the characters and maybe have a plot that doesn’t involved a sphere-shaped object that needs blowing up. Now, I remember being at the premiere of The Phantom Menace in 1999 and getting really excited about the new bad guy Darth Maul that sadly failed to transpire into anything meaningful and left audiences and myself disappointed. So, Kylo Ren being equally disappointing I really want any future films to have an evil character, shot at low angles and truly scary with a great theme tune to boot. 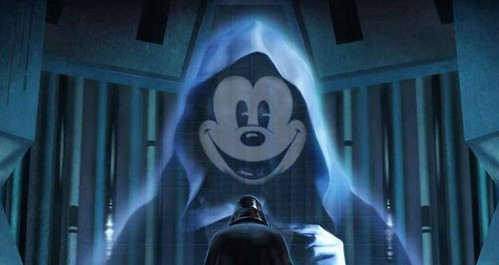 I doubt however that’s in keeping with Disney. We will probably end up with Darth Mickey.

Lets see what happens next in a galaxy far, far away.

One thought on “Darth Moli…”